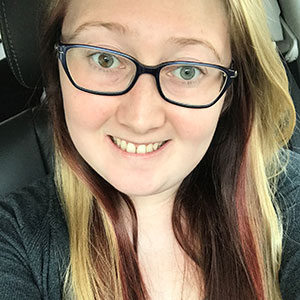 Ashley Evard had been in college for three years when her life began unravelling. “My first few years of college were fun,” she said. “I had good grades, was active in my sorority, and had lots of friends.” But gradually things changed. “My grades started falling, I was less involved in activities, and I began losing friends.” She wasn’t sure what was happening but said she felt empty. She began skipping classes and isolated herself because she was afraid people thought there was something wrong with her. Eventually Ashley quit school and moved back home with her parents where her symptoms just got worse.

Ashley was suffering from depression and acute anxiety, but she didn’t know it. Neither did her parents or friends. No one around her seemed to know how she was suffering and would tell her she was going to be alright. But as time passed, she sank deeper into despair, frequently questioning the value of her life. “I no longer enjoyed anything that I used to do,” she said. “When my dad would try to get me to join him on a bike ride or go to a movie, I said no. I was lost. I felt as if I had no purpose and could not see a point to my life.”

Eventually her father, seeing his daughter’s depression worsen, insisted that she get help. He took her to the Behavioral Health Center at Capital Regional. “He took me in for a mental health assessment and they admitted me for a few days of inpatient care. I wasn’t happy about it at the time, but it was the best thing they could have done for me.” Once discharged from the hospital, Ashley began a five-week outpatient group therapy program. That, along with anti-depressant medication, helped her turn her life around.

“The biggest revelation was finding out that I wasn’t alone,” she said. “It was super helpful to know that I wasn’t the only one with this problem. There are other’s out there. When you are suffering you feel very alone, but when you go to group therapy you realize you aren’t. The outpatient program helped me to accept my condition and taught me skills to live with it. Accepting that something is wrong is a huge part of recovery. It’s the only way to be able to embrace the tools and skills needed to carry out even the simplest of daily tasks.” She learned that everyone is different when it comes to coping. Now when something triggers her feelings, she knows to talk to someone who is supportive, or do something like exercise or watch a funny movie – whatever it takes to begin feeling positive again. Today, at age 24, Ashley is on a mission to raise awareness about mental health. “If my friends and family had known more about mental health, they might have recognized my symptoms and I might have gotten help sooner. I believe that talking about what mental health is and being more open about it will save lives.”

To further her mission, she helped start a support group under the banner of the National Alliance on Mental Illness (NAMI). The group, NAMI Connection Recovery Support Group, meets weekly on the campus of Capital Regional Medical Center. “It’s a peer-led support group and members benefit from being able to talk to and listen to others,” she said. “Getting professional help at the Behavioral Health Center is a very important first step to recovery. But you have to work at it every day and that’s why finding a support group like this one is a great tool for those of us in recovery.” For more information or a mental health assessment, contact the Behavioral Health Center at Capital Regional by calling (850) 325-5757. For information on the Connection Recovery Support Group, visit its website.