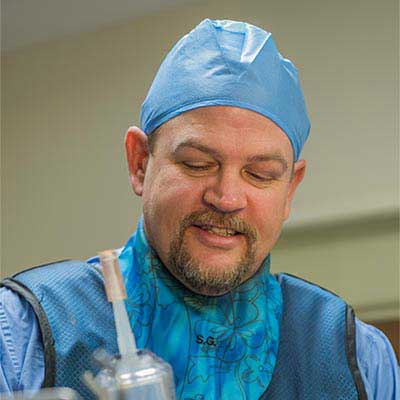 Andrew Atkinson knows what quality cardiac care is. It's not just because he is a registered nurse caring for patients in the Cardiac Catheterization Lab at Capital Regional Medical Center. It's because he's also been a patient in that same unit and credits the team with saving his life.

Mr. Atkinson left the Tallahassee area early in life to join the Navy. After traveling the world serving the country, he settled in Milwaukee, Wisconsin and continued his service in the field of healthcare as a registered nurse. In August 2016, he decided to return to Tallahassee. It was during the aftermath of Hurricane Hermine that hit the panhandle in September that his health changed the course of his life.

"During the hurricane clean-up I was helping a neighbor when I started having shortness of breath," he said. "I called my girlfriend and EMS. By the time she arrived so had the ambulance and I was transported to Capital Regional Medical Center. They determined I was having a heart attack and was immediately taken to the cath lab and then to surgery for a bypass." Mr. Atkinson said that at age 46 he was a victim of genetics. "There was heart disease in my family coupled with the effects of southern cooking."

The team at Capital Regional Medical Center had a profound impact on him. "Everyone there was awesome! Not only did they provide excellent care to me, they were kind and helpful to my family and visitors. Having worked in healthcare, I know that the level of service they provided is not common. It's exceptional. They gave a special meaning to southern hospitality."

"I decided I wanted to work at Capital Regional but rather than caring for patients in the gastro-intestinal field as I had in Wisconsin, I wanted to go to the cath lab," he said. "During my interview with the director of the unit he asked why I wanted that position and I said 'because you saved my life.' Every day moving forward is a gift to me. I want to work in an area where I can give that gift to others."